THE SECRET HISTORY OF SCIENCE FICTION

"What we normally consider the mainstream — so called realistic fiction — is a small literary genre, fairly recent in origin, which is likely to be relatively short lived. It’s a matter of whether you’re content to focus on everyday events or whether you want to try to encompass the entire universe. If you go back to the literature written in ancient Greece or Rome, or during the Middle Ages and much of the Renaissance, you’ll see writers trying to write not just about everything that exists but about everything that could exist". - Gene Wolfe 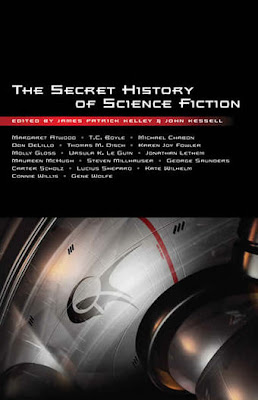 "Let's face it, the SF Ghetto was constructed from the inside out and zealously maintained from within." - James Patrick Kelly

"The thing I have always liked best about science fiction is that it defies definition.
It keeps constantly reinventing itself – and just when you thought stories about robots or time travel or first contact had been done to death, it thinks of some brand-new story to tell". - Connie Willis

"It seems to me that SF is standing, these days, in a doorway. The door is open, wide open. Are we just going to stand there, waiting for the applause of the multitudes? It won't come; we haven't earned it yet. Are we going to cringe back into the safe old ghetto room and pretend that there isn't any big bad multitude out there? If so, our good writers will leave us in despair, and there will not be another generation of them. Or are we going to walk through that doorway and join the rest of the city? I hope so. I know we can and I hope we do, because we have a great deal to offer – to art, which needs new forms like ours, and to critics who are sick of chewing over the same old works and above all to readers of books, who want and deserve better novels than they mostly get. But it will still take not only courage for SF to join the community of literature, but strength, self-respect, the will not to settle for the second rate. It will take genuine self-criticism. And it will include genuine praise." - Ursula K. Le Guin

"Before Hugo Gernsback there was no separate science fiction genre
(or "scientifiction" as Gernsback called it, Forrest Ackerman popularized the current two-word term).
Writers from Mary Shelly, Hawthorne, Melville, Poe, and Twain used themes of the fantastic in their works that are still considered classics of literature today. Jules Verne and H.G. Wells explored advancements in contemporary science and technology and were lauded by audiences around the globe inspiring millions." - John Kessel
Publicat de Sorin Camner la 18:49